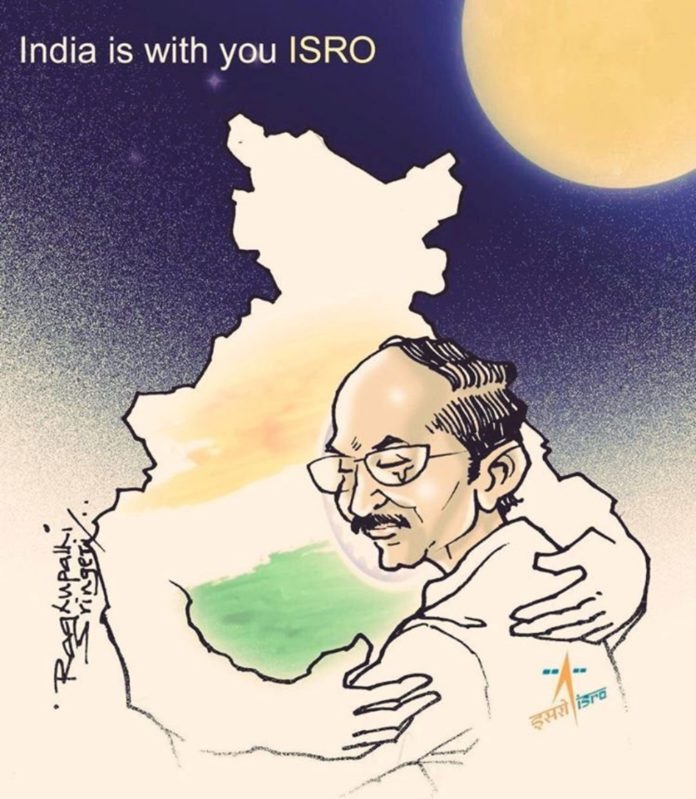 I am writing this to you to express my gratitude to you for all the work you have done for the nation. Our heads are held high in pride today because of the achievements and laurels you have brought to the country. Watching the live proceedings that night, I was one of the billion Indians who were eagerly waiting for the landing confirmation when just 2.1 km from the surface, communication from the Lander ‘Vikram’ was lost. I was as anxious as I would generally be during final over of India vs Pakistan cricket match.

But when I saw dull faces of the scientists that night on the screen, I felt all my optimism vanished in a matter of few seconds. And when Dr. Sivan gathered himself to make the announcement that we have lost the connection with lander Vikram, I think the whole nation had its breath in the mouth. And this is the reason; I fail to understand how ISRO failed with the Chandrayaan-2 mission.

Before I proceed further and defend myself, I’ll take this opportunity to congratulate each and every person who worked tirelessly to make this mission reach that far. The nation owes these brilliant men and women a huge debt which can never be repaid. Besides the scientific achievement, they have had achieved greater moral achievement. They have managed to inspire and motivate a whole generation of young buds of the nation to aim for the stars.

Coming back to you, by placing the orbiter into the orbit, you have given Indian youth a reason to not only dream of Moon while romancing but also dream of landing on the lunar surface for exploration. We now have confidence that all the science fiction stories which we all heard while growing up exists outside the realms of our imagination.

As a kid, I always thought space as something which is very far and no matter how desperately you want to go there, you cannot. Then came the time when my imagination of space was limited to Hollywood movies. Though these movies were very good entertainment source, they failed to inspire and motivate me.

However, this would no longer be an issue with a child growing in India now. Today, Chandrayaan-2 has inspired and motivated every youth of the nation in such a way that each one us wants to become astronauts and we also are well versed with the possible dangers which space has in store for us.

Since the very beginning, we Indians have been very proud people and we take pride not only in our individual achievements but also in the achievements of our fellow citizens. From Aryabhatta to Kalpana Chawla, we have a long history of creating new extremes each time we enter the domain. And Chandrayaan-2 was another such pinnacle in the field of space science.

But there is a problem too with us, we want more. Our thirst doesn’t get quenched so easily. As an Indian youth, I have no doubt that one day we’ll land on not only Moon but other planets too. And that day is not far when you’ll see tricolor flattering beyond the planet.

The video of Dr. Sivan being consoled by our Prime Minister Narendra Modi touched my heart. Sir, I wanted you to know that you don’t need to be sad about the things which might have happed another way. It is normal for the things to not go as per plans. And as they say, setbacks set way for glory in the future. I and fellow citizens of the nation have no doubt that one-day ISRO will conquer the reaches of the imagination of mankind.

Space is the ultimate future of human civilization and Indian Space programme being one of the most cost-efficient space programmes in the world is going to be the centre of attraction of the universe. It wouldn’t be incorrect to say that when mankind will set its foot beyond this planet in search of a new home, ISRO would have a huge role to play in that quest.

To summarize, I would once again like to thank and congratulate everyone at ISRO for making us believe that we should dream big and then have the courage to achieve them.