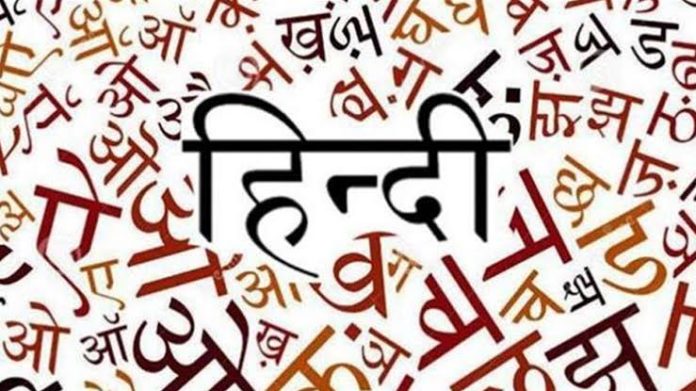 Early morning when I woke up, I received a text message wishing me for Hindi Diwas. It was on the 14th of September, 1949 when Hindi written in Devnagri script was adopted as one of the official languages of the country. Since then we have been celebrating Hindi Diwas every year on this day. Still, a lot of Indians are confused till date for the status of Hindi in Hindi.

The text message I received said and I quote,” Rashtrabhasha Rashtra ka Gaurav Hai, Rashtra Diwas, Hindi Diwas ki Hardik Subhkaamnaaen”. I was one of the recipients of this text, there might have been a lot of others. Teachers of the government school teaching Hindi sharing the same kind of messages on their WhatsApp stories to show their love for Hindi to more than 600 people in their WhatsApp contacts. It came as a shock to me for I believed them to be proficient enough to understand the status of Hindi which still stands to be our official language, not the national language.

Recently I have been reading the constituent assembly debates of India which might be taken as the activity for sowing the seeds of our nation, drafting the constitution of India.

I came across one interesting debate which happened on the 10th of December, 1946. Mr R.V. Dhulekar who was a member of the United Provinces at the Constituent Assembly. He was the first one to propose Hindustani and later Hindi as the national language which created a lot of stir in the parliament.

It was effectively the first day of business, R. V. Dhulekar of the United Provinces moved an amendment. When he began speaking in Hindustani, the Chairman reminded him that many members did not know the language. This was Dhulekar’s reply: ‘People who do not know Hindustani have no right to stay in India. People who are present in this House to fashion a Constitution for India and do not know Hindustani are not worthy to be members of this Assembly. They should better leave’.

A lot of leaders were unhappy in the way it was being presented in front of the assembly. Mr President who was the chairman of the constituent assembly did not allow him to move ahead with this motion.

A lot of members from the Southern part of the nation disliked the idea for it was not the idea of India as a nation. They were of the thought that India is a diverse country having several languages and accepting Hindi as our national language was the imposition of a language which Britishers tried to do with English across India. Leading from the south representative are these remarks of T.T. Krishnamachari,

“We disliked the English language in the past. I disliked it because I was forced to learn Shakespeare and Milton, for which I had no taste at all… if we are going to be compelled to learn Hindi… I would perhaps not be able to do it because of my age, and perhaps I would not be willing to do it because of the amount of constraint you put on me … This kind of intolerance makes us fear that the strong Centre which we need, a strong Centre which is necessary will also mean the enslavement of people who do not speak the language of the Centre. I would, Sir, convey a warning on behalf of the people of the South for the reason that there are already elements in South India who want separation …, and my honourable friends in U. P. do not help us in any way by flogging their idea of “Hindi Imperialism” to the maximum extent possible. Sir, it is up to my friends in U. P. to have a whole-India; it is up to them to have a Hindi-India. The choice is theirs …”

3 years down the line on 13th September 1949, again R.V. Dhulekar was allowed to speak. This time he asked for Hindi not Hindustani to be the national language of India. Hindustani was the composition of Hindi, Urdu, Persian and other languages. Post 1947 the advocates of Hindustani were upset due to the partition and leaving other languages they continued their advocacy for Hindi. Replying to banter from Shri H.R. Guruv Reddy, Dhulekar said,” You say, let this. The English language remains as the official language in this country for another fifteen years. I shudder at the very idea of it at the very idea that our universities and our schools and our colleges. colleges and our scientists, that all of them should, even after the attainment of Swaraj, have to continue to work in the English language. What will other people say? What will the , host of Lord Macaulay say? He will certainly laugh at us and say, “Old Johnnie Walker is still going strong” and he will say, “The Indians are so enamoured of the English language that they are going to keep it for another fifteen years.” And some here say, it will remain for twenty years. and some say, for fifty years and there are still others who say they do not know for how long it should remain as our official language.”

And finally after a long debate, banters and sarcasm Hindi in Devnagri was adopted as the official language of the nation and that’s why we have been celebrating Hindi Diwas on 14th of September every year.

Today 72 years down the line India is moving ahead making its way towards becoming a leading nation across various sectors. India is a composition of 27 states and 9 union territories with 122 major languages out of which 21 languages have been identified as the official languages. And this is what India is known for, ”Its Diversity”. According to the latest data from UNESCO on languages, 46 Indian languages have been considered in the endangered category. Hindi being the most widely spoken language in India is the mother of several dialects though we need to accept the fact that India is known for its diversity and we should accept its diversity wholeheartedly.